According to a new report from the World Cancer Research Fund, about a third of the 12 most common cancers in high-income countries could be prevented through diet, exercise and weight control.

Panel chair Professor Sir Michael Marmot said: "This report shows that by making relatively straightforward changes, we could significantly reduce the number of cancer cases around the world."

Some simple changes recommended by the report are heightened daily activity like cycling to work. Also, the reduction of fatty foods for healthier fruits and veggies play an integral role. The report says all sections of society "from governments to households"should make public health, and cancer prevention in particular, a higher priority.

"The evidence linking diet, physical activity, obesity and cancer has become stronger over the last decade," says Professor Mike Richards, "and this report can play a part in people adopting healthier lifestyles. After not smoking, it is clear that diet, physical activity and weight are the most important things people can do to reduce their cancer risk." 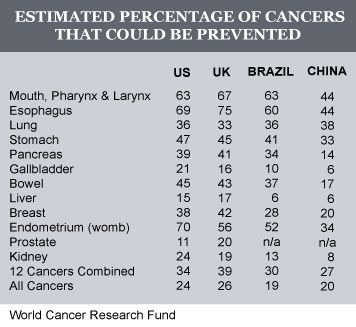